As noted below, 2022 saw progress on the Wildlife Sanctuary severely constrained by a couple of clever and determined sheep somehow sneaking in to deliver damage and threat.  At time of writing (January 2023) this problem has now been absent for seven whole months, and the two offenders have also rather comfortingly not been seen in all that time.  (As one of them was just a lamb when last spotted, we can’t be certain that it hasn’t been seen more recently, but at least it hasn’t been recognised or observed actually within the sanctuary itself).

As with the previous year, 2022 had a large central section of dry and sunny weather; so much so that we had to resort to emergency watering in all parts of the garden including the sanctuary.

Through the autumn we were able to plant out many trees that we had propagated in pots, including several horse chestnuts, yews and laburnum.  We also planted many shrubs and other trees in smaller numbers, such as gum, acer, lilac and alder.  We are not following a plan as the ground cannot be relied upon to be deep enough to take a tree, so it is often a case of sinking the fork in and if the slate underneath is not too solid we have a go at digging deeper.

We have made further progress with the pond but there is still a long way to go and once we have repaired a big gap in the outer wall we hope to prioritise the pond as a major target for 2023 completion.

This year's review will now conclude with a list of flora and fauna observed in the sanctuary (that is, not in the formal garden).  This list will be updated with details as and when new data emerge.  It is all joyous to us, as anything listed becomes a reason for continuing the project as well as a reward for our efforts.  If the sheep stay out until May 12th that will be exactly twelve sheep-free months, and our cue for removing the fences and other protections which currently still surround a great many of our vulnerable botanical specimens.

Just as I was sinking into perma-pessimism regarding the climate, along came 2021 with a long period of hot dry weather. There were no sheep in the field this year, except for some who have occasionally jumped/climbed over the walls/fences from the neighbouring field. I chased them out diligently, until there were just two who still appeared frequently in the field: one VERY large and muscular athlete capable of jumping over a five-feet high fence (I witnessed this myself and it’s a dispiriting sight if you long to be nurturing trees rather than building up walls and fences); the other smaller and less powerfully built, but still capable of climbing onto a wall and jumping from there over another 3-4 feet of fencing.

At the time of writing (February 2022) there is still one ewe that climbs or jumps into the field at least once a day, but the fence-building is now scheduled to start in the next mild spell to show up.

Although officially we took full control of the field from Sept 1st, it has effectively been ungrazed since late 2020, so it is interesting to see which plants have already shown a presence. They include cuckoo flower, birds foot trefoil and yarrow, the last a particular favourite of mine and already showing in a large swathe of approx 20 individual specimens. I have made several attempts to introduce yarrow to the formal garden in the last 5-10 years, all with only the most meagre success rates and never getting established; so it is amazing, delightful and really quite ironic that it has appeared unaided and in such strong numbers at the first semi-opportunity.

We are also seeing many thistles, not a new phenomenon, and some rock rose (which also I have encouraged in the past to little avail but which has now appeared in a few new places, again seemingly arising from nothing). Do bear in mind that this field has been grazed by sheep for at least two decades, probably longer, so it is marvellous to see wild plants rushing in as soon as the plant-chomping animals have been removed.

The birds foot trefoil is especially surprising, showing up in many huge swathes after a quarter century of complete absence.

I have also seen some insect life in the field that appear to have taken immediate advantage of the sheep-free state of the field. These include a small fritillary and a blue, both of which I was unable to identify with precision as they were busy travelling across the field at speeds of 30+ mph.

The 2020 review is extra-short because our harddrive crashed, taking with it the only 'saved' photo of the sheepfield.  The pandemic restrictions stopped our digital fixer visiting, and this combined with other developments to prompt a new pattern.  But, to sum up, after a sodden winter and a drought for spring, 2020 has been relentless rain again.  The ice caps are melting and it looks like we will have to get used to a semi-permanent waterlogged state in the garden, at least.

Most novels, films, sitcoms and short stories leave out the stuff that doesn't matter.  'Seinfeld' has some of the best and most brutal editing in the history of tv, and it's much better for it.

As in art, so in the garden. Nature puts plants all over the place; our job is to remove the stuff that is problematic. Sometimes we move it elsewhere, especially if it's a tree. But basically, for Woodminster at least, gardening is 1% planting and 99% cutting.

One sad result of this is the fact that we end up killing trees. Yes, even oaks and ashes. I never thought it possible but we now get so many baby oaks that we sometimes have to let the lawnmower cut some of them down. We treat them like weeds. Technically they are weeds (bearing in mind the classic definition of a weed as a plant that is growing in the 'wrong' place). The difference is, it is deeply upsetting to pull up these particular weeds.

And (b) you can have some surplus trees if you can use them.

YIN AND YANG COVERS NEARLY EVERYTHING.

Animals are sweet, spiritual and noble.

The world is going to Hell in a handcart.

Things are improving all the time.

Head is no good without heart.

Heart on its own is even worse.

The most important principle to emerge from all these other principles goes something like this:

Any one-sided, exclusional doctrine is (almost) certain to be false and destructive. It is vital, therefore, that any leaders/decisions/policies/systems MUST demonstrate the wisdom of balance or, at the very least, some effective qualifying clauses that will prevent the engine going off the rails.

Please note this is not the same as compromise, which often results in the dilution/neutering of power. A better analogy would be a motorway or railway line that is basically only ever going in one direction (er...forwards!) but which remains subject to speed limits, rules for junctions and the merging of traffic, policing (by the police!) and most useful of all, barriers along the side with structural weaknesses built in and which function as an elasticated belt to guide and protect those who have lost control, who would otherwise crash off the road altogether. 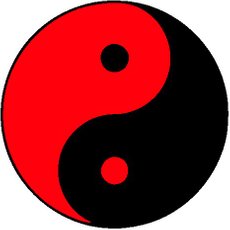